How the king broke my heart! 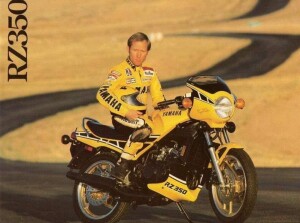 And why I became such a huge Freddie Spencer fan.

So it was 1984, I was just a young kid riding my very 1st motorcycle around the back roads of Massachusetts. I would go into my local moto dealer and drool over the new bikes, this was the dawn of the true sport bike age.
Sky cycle was my heaven back then. Suzuki, Kawasaki and Yamaha is how they got the name SKY cycle. I would go in and collect all the brochures of GPZ’s, FJ’s and GS’s sit on them when I had the chance and read the local road racing newspapers they had scattered about. Names like Randy Mamola, Eddie Lawson, Freddie Spencer were the big time Americans racing all over Europe back in those days.

Then one day I saw it over in the back corner of the dealership. I was one of those metal towers with brochures of each bike that was offered that year. One such brochure caught my eye, it was a yellow RZ 350 ad with Kenny Roberts sitting on one. Two stoke motor, Bumblebee paint job, mono shock rear end, it was like they took the bike right off the race track and brought it to Central Massachusetts just for me!

I had to have one! However I wasn’t ready for that kind of power just yet. I had to train, I had to read every thing about bikes, racing and riding I could get my hands on.
While most kids my age had posters of Farrah Fawcett my bed room was full of posters of bikes and racers and maps of far off places I wanted to see.. king Kenny was #1. I wanted that bike with his name on it so bad.

I saved and saved and finally was able to get one. It wasn’t the yellow bubble bee but it was my very 1st new bike, I had just graduated High School and the very 1st thing I purchased was a brand new (Leftover) 1984 RZ350. I put an after market full fairing on it and took off riding! 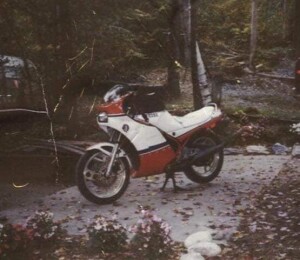 By then the king had retired from racing and guys like Lawson, Mamola, Spencer , Baldwin were dominating the world of GP races. However he was still #1 in my book!

Then it happened, I got my new motorcyclist magazine in the mail ( it might have been cycle world) and there was an article with the King himself riding a RZ on the back roads of Hawaii. With someone else on a 500 interceptor , was that you Nick Ienatsch? 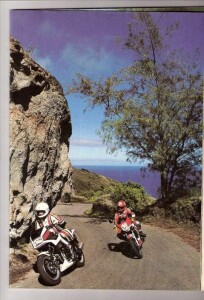 I was so excited to read his own words about the very bike I owned. At the time I subscribed to every motorcycle magazine published, and was so totally in love with riding and racing.
Oh was my heart about to get broken, reading what the King Kenny Roberts said and then did to my beloved RZ …ugh. He praised the 500 Honda and thought it was a better bike to ride the twisties, then proceed to ride the RZ into the ocean. I’ve searched for photos of this event but can’t find it.

I remember think what a arrogant prick this guy was. I worked so hard to be able to afford one, and so looked up to him. I was heart broken and so sad to see that beautiful little RZ floating in the surf, ruined at the hands of the guy who had his name painted on it.

From that day on I became a Freddie Spencer fan!
Time to forgive the guy?