I like old maps, the smell of coffee and flashy helmets. 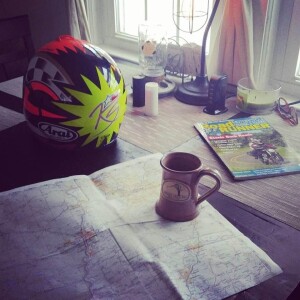 Yeah I’m not like most people, I get that. I look at life differently then most, normal to some completely wacked to others.

I think I have always seen the romance in life, and how to live it. I think that’s a common thread for us motorcyclists. Maybe not all two wheeled rides, because some see motorcycles as a tool while others like me see it more as a passion, a way of life.

When did it start? Well for me later then some, I was a freshman in HS when I got my first bike. It wasn’t a dirt bike but a road bike , a Honda CB.

I’ve always been fascinated with travel, movement and seeing things for the first time. So when I was introduced to that 450cc twin and the freedom that machine gave me, well I was …as they say “hooked”!

Just a few years before that I was also passionate about writing. Back then it was poetry and short stories, usually about what I was experiencing at the time.

Introducing motorcycles and journeys to that passion was just something that took off with me. It wasn’t until much later in life that I have been comfortable in sharing these thoughts, feelings and passions with people.

Those first few years in the early 80s on that Honda was truly a magical time in my life. Those memories live inside me, and they come out with each ride I take now. I know some of you reading this know exactly what I’m talking about.

Even if T. Wolfe once said “ You can’t go home again” I can honestly say I go home with almost every ride! Shit I even can go home sitting here having my coffee and reading a paper map.

I might have been the only kid in the 80s that had maps of Alaska, South America and other far off lands on my bedroom walls instead of Farrah Fawcet posters. My hero’s had names like Spencer, Mamola and Lawson, I dreamed of places like IoM , Dalton Highway and Daytona.

Matter of fact I still have a huge box of those maps, posters of cities I’ve never been to and even a few old National Geographic magazines. Places I would dream about visiting some day. Roads I would study so when I finally got on PA 144 I could see that blind sharp left hander approaching.

I’d circle places like Watkins glen state park, Mackinac Bridge and Fontana Dam. Places I needed to visit , and see. I have so many maps with roads Highlighted  and unique natural features circled.

Yes google and travel apps make keeping and adding to these lists a little easier, and trust me I have an extensive Google map list. However that doesn’t stop me from taking out that old box, dusting off a few maps and reading a few motorcycle articles.

Oh look how did that Farrah Fawcett poster get in here?